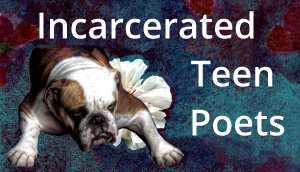 Note: if you want to read about the individual sessions, as they happened, you can read the blog posts here:


Whenever people ask about the whys and the hows of what I do in my poetry workshops with incarcerated youth, I often struggle for a starting point.

How do I tell you about the sight of a boy pouring his heart out on the page with no one standing over him telling him he is dumb for doing it? How do I tell you about the pride of a young man standing up to read his poem to the class, a poem that exposes the deepest hurting part of himself? How do I tell you that the simple act of me showing up every session, no matter what they said or did or tried to do to push me away, that my showing up showed them that someone cared which meant that they were worth caring about, worth saving? How do I show you the very heart of these boys, these boys who had never written poetry before, who tried so hard at something so new, and who succeeded beyond my expectations?

Maybe I start by telling you not about these boys but about someone else in my life that I love very much, someone who struggles with demons that threaten to overwhelm them, someone who feels worthless and unloved and as a result makes bad choices that result in negative consequences that cause that person to continue to spiral downward.

Someone I can’t save no matter how many times I’ve tried.

I’m a children’s writer and poet by trade and I tell stories to try and fix things in my life that I can’t ever seem to really fix for real. I’m a fatherless daughter that writes stories about positive relationships between fathers and daughters. I’m a divorced mom who writes stories about kids trying to make sense of broken families. I’ve been poor and abused and I write stories to try and understand why those things happened to me and how to keep them from happening again.

The local arts council in my town has a wonderful program that matches up visual artists, musicians, dancers and writers with teenaged students in the at-risk population. The idea is that art empowers these teens to make a difference in their lives. Kids who don’t or won’t talk to teachers or counselors can often find a way to work out through art. I’m lucky enough to have received grants the past few years which have allowed me to go into alternative schools; usually with students who are incarcerated, and try to teach them what I know how to do best . . . spill your guts on paper.

Try is the operative word here because it doesn’t always work. These kids are locked up both literally and metaphorically. They have been in and of gangs, jail, and foster homes. They have learning problems, language problems, and a giant dose of attitude – But they all have something to say.

One of the most difficult students I’ve ever had was Edgar. He was big, built like a battering ram. He had escaped a detention facility and had been on the run for two years. At sixteen he was back in the classroom and wearing an electronic surveillance ankle bracelet. He wrote about gang life, getting drunk, and hurting people. He was the only student who ever made me feel afraid and I never really felt like I connected with him until the day I asked the class, “If you could go back and change something in your life, what would change and why?”

Some kids went right to work writing. But not Edgar. He just leaned over the desk and held his head in his hands. When I asked him what was wrong he told me he didn’t have enough paper. I thought he meant to write on so I put a stack of paper on his desk.

Then he told me no, he meant, there wasn’t enough paper in the world for him to write about it all. He said he’d change everything. Then he said that it didn’t matter. That he had screwed up, he was going to court the next week, and he knew he was going to be locked up again.

I didn’t ask any questions. I just told him to write.

All the other students finished and left but Edgar kept on writing.

When he finally got ready to go he told me that writing was hard but that it made him think. And sometimes it even made him feel sorry for the things he had done.

People ask me what I do exactly, how I prepare for the sessions and the truth is that it’s hard to prepare for this sort of thing. I try but it’s mostly different every time. A few things stay the same. I read them some poems at the beginning of each session. Their reactions to those poems, and the discussions that come as a result, help me decide what to bring in the next time. I usually start off with acrostic poems because most of them are familiar with the format and by doing a name poem it helps me get to know who they are. I talk about using all five senses early on because then it becomes a warm-up to do a group poem using all the senses before we get down to the writing of the day. I like to do a family poem because for these kids, especially the ones who have been locked up for a while, family is everything. I have to prepare a new lesson plan each night because so much of it depends on how things went in the previous session. And I always bring a couple of extra lesson ideas because sometimes what seems like a good idea falls completely flat.

There are so many things to be aware when I go into these classrooms. I need to not wear blue or red because those are the colors of the rival gangs of my area. In some places I need to pin my long hair up so they can’t grab it and not wear long dangling earrings. I need to not let them write about gangs and drugs and much of the only life they know. When we do art I need to make sure they don’t sneak some gang symbols onto the page. And they always try. The class never stays the same. Some kids are removed. Some new kids join. Some work willingly and some, even with the threat of losing privileges would prefer to challenge me every step of the way.

But the hardest part of it all is something I can’t prepare for – their reaction to me. Some of them are outright hostile. Some just silent. Some want to be the class clown and some want to disappear. I never know how I am going to deal with each of these situations until I’m right smack in the middle of it. Sometimes what I do works and sometimes it doesn’t and I have to try again.

But when it works, it works in amazing ways.

The lonely boy whose dad only cared about getting drunk and smacking him around wrote love poems for his girlfriend.

The boy who was an overachiever at everything, including being a gang member, wrote long poems about his family and how much they meant to him.

The class clown wrote about having no friends.

The boy who knew he might never get out of jail again wrote poems of apology to his mother.

Becoming involved in poetry helped open the prison doors of their souls. They became vulnerable and real. The simple act of me showing up every session, no matter how hard they pushed me away, showed them someone cared. It gave them hope. And the way I look at it, if we can give them hope, we can help them make a change in their life.

Here is a group poem the kids wrote in one of my sessions.

Poetry
has a beautiful life to it.
You sound like happiness, sadness, love
taste like fresh strawberries
and feel like soft skin, sandpaper, a brick wall.
Poetry is all the colors of the rainbow
and smells like freedom, incarceration, a sexy girl.
Oh poetry, you drive me crazy.
You make me want to scream, to feel, to heal.
You look like sunshine and moonlight in the city.
Poetry is feelings on paper.

This isn’t easy work and I’m not the brave, strong person some people think I am. But I love words. I believe they have enormous power. Power to do good, power to heal, power to bring hope.

I believe we need to dare these kids to look at their lives differently. We need to give them new tools for expressing themselves.

And then we need to listen to what they have to say.