Enrique Esparza and the Battle of the Alamo

After several long years (this book sold the same month Hugging the Rock did) I am proud to announce that the true story of Enrique Esparza and the Battle of the Alamo is out from Lerner Publishing. The illustrator, Jeni Reeves, did a marvelous job on the illustrations. 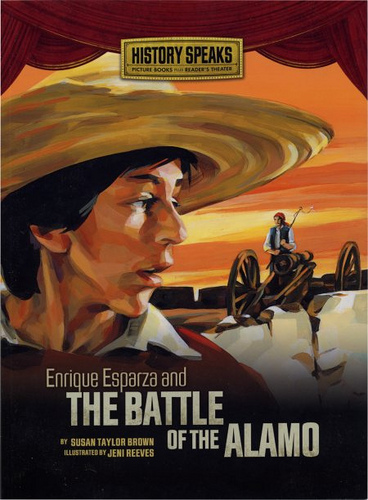 This book is based on the true story of young Enrique Esparza who took shelter at the Alamo with his family when Mexican General Santa Anna and his army came to battle the Texans in San Antonio. The book is out in both hardback and paperback at the same time which I think is very smart of the publishers. And what fun for teachers, there’s a Reader’s Theater all ready for you in the back of the book!

Now if I could just figure out how to get it into the gift shop AT the Alamo, wouldn’t that be sweet? 🙂

Feast or famine, a writer's life

Then I decided to wade back into it all. I was ready. I could go slowly. I had nothing pending that needed my immediate attention so I could play with a few ideas and see where they took me. My only writing goal for 2008 was to write three proposals. A hopeful goal would be to turn one into a really rough draft of a complete book. No problem. I had three ideas that interested me: the flying book I’ve been trying to write for over 20 years, the plant book, and Max.

First I worked on the flying book. You may remember my huge index cards project. By the time I was done I was hyped up and ready to go to work. Then came Christmas, family melt-downs and illness. I lost my way.

Because I didn’t know what to do next, I borrowed an idea from

and started writing letters to the main characters in the three books I wanted to work on.

The way I saw it, even if I wasn’t actually WRITING a book, I was THINKING about writing again. I know that thinking about writing and actually writing aren’t the same things but I was okay with inching my way slowly back to words. I figured a few letters to Flyboy would be all I’d need to take off writing about him. Across the last couple of weeks I’ve written about 20 new pages for Flyboy, in longhand. It’s not a lot, especially if you look at the word meters so many writers post in the blogs, but for me it was progress and that was all that matters.

Now here’s what’s been going through my writer’s brain. When I wrote the new pages on Flyboy I thought they were horrible, stilted, boring and had absolutely nothing to recommend them. They were garbage, the crappy first draft I had to get through before I could find the story. But writing such horrible junk stifled me. How would I ever be able to turn it into a book that someone would want to read? I tossed that notebook aside and went back to the character letters of the Plant kid and the story of Max. One day I saw the plant kid in the yard and I grabbed a notebook and jotted down what he was doing. And then I shivered, those good shivers which tell me there’s something there, maybe even that elusive voice. Yet I tossed that notebook aside too because I was supposed to be working on Flyboy’s book first. It was the one I had promised myself to finally right or admit that I would never write.

But I couldn’t make myself go back to that crummy draft and reread those stilted words. I couldn’t make myself ADD to those stilted words. So last night I looked at the letters I had written about the story of Max and wondered about him a bit more and I wrote the opening scene. And it was all there, his friend, the gypsy lady, the setup, and of course, Max. In one short scene. And I shivered again.

Before bed last night I told my husband that was it, Flyboy was grounded because it was absolute crap and had no magic and it was obvious I was supposed to work on the plant book and Max. So so obvious. Absolutely not interested in working on that flying book at all.

Each night I give myself a dream suggestion to do with my writing. I wasn’t sure what my question was going to be so I picked up the notebook on my nightstand (you can totally see where this is going, right?) and I figured I’d just flip through it, read a few pages, give myself a dream suggestion and call it a night. I saw Flyboy’s pages and thought there was no harm in reading them because I had already decided they were crap and I wasn’t going to work on that book.

And the Universe giggled.

Sure, the words were still rough and there were lots of missing pieces and bits of notes to myself like (describe this and what is that gauge called again and why doesn’t this character have a name) but I got sucked into the scene, the story, and I wanted to know the answers to the questions I had posed in those pages. And most importantly, again, I felt the shiver.

What does this mean? Well besides the fact that it appears I am currently roughing out 3 books at the same time, (which means it’s going to get really crowded in my head and my poor husband will be once again bucking for Sainthood) it means the magic is back. Because I think that’s what those shivers were – the reminder of how wonderfully magical it is to have these stories to tell and the ability to tell them. I woke up excited at the thought of diving deep into fiction.

The Universe has a wicked sense of humor though. Way back in October of 2006 I sold a book called Enrique Esparza, Boy at the Alamo. A true story. A non-fiction book filled with facts and history and things I researched almost 2 years ago. After over a year of complete silence, of not even having an editor assigned to the book, suddenly the edits are coming my way tomorrow.  As in the day after today.

And she would really like them back in a week so we can keep on schedule for the fall 2009 publication. Sigh.

Fiction may have to wait a bit longer but that’s okay. I have the shivers to help me find my way back.

Do you recognize the new user pic?

That would be the Alamo. As in Texas history.  As in the location of the story for the book I just sold to Lerner/Millbrook.

It’s called Enrique Esparza, Boy at the Alamo and is part of the “On My Own History” series (as is my book Robert Smalls Sails to Freedom.)