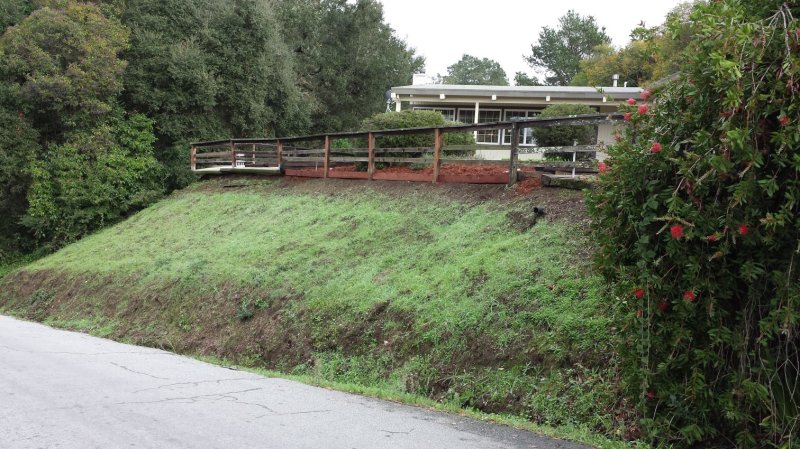 Back in April of 2014 we sold our house in San Jose. The reason? We were in the middle of town on a small lot of about 6,000 sq ft. The house was large but the yard was oh so small. Every dog we have ever had was limited to the amount of space they could run around in there and we were limited by how much we could garden.

So we packed up the old house (which we sold on our own in less than a month) and looked for an apartment that would let us have a 75 pound German Shepherd. Not easy to find, believe me. We moved most of our stuff into storage and moved our thousands of books into my in-law’s garage and we settled into the apartment life.

Because hubby and I have a great love for all things in Santa Cruz county we set out to look for a home on the other side of the “hill” over highway 17 and into the Santa Cruz foothills. We set our scope wide and looked at homes from Aptos  to Soquel to Captiola to Santa Cruz to Scotts Valley. We didn’t want a turnkey home because well, price for one thing but also we wanted the chance to create the home of our dreams. Plus, I’ll be honest, so many of the homes that were already finished were very modern and often formal showplaces and that’s just not our style. We wanted a larger lot than we had before and we wanted a single level home. Other than that, we looked at just about everything.

Eight months later we found the just-right-for-us piece of property. The lot is much larger than before with just a small amount of base landscaping and a blank slate for the garden to come. The house is tired but that’s okay with us. We have lots of ideas of what we want to do to the place. 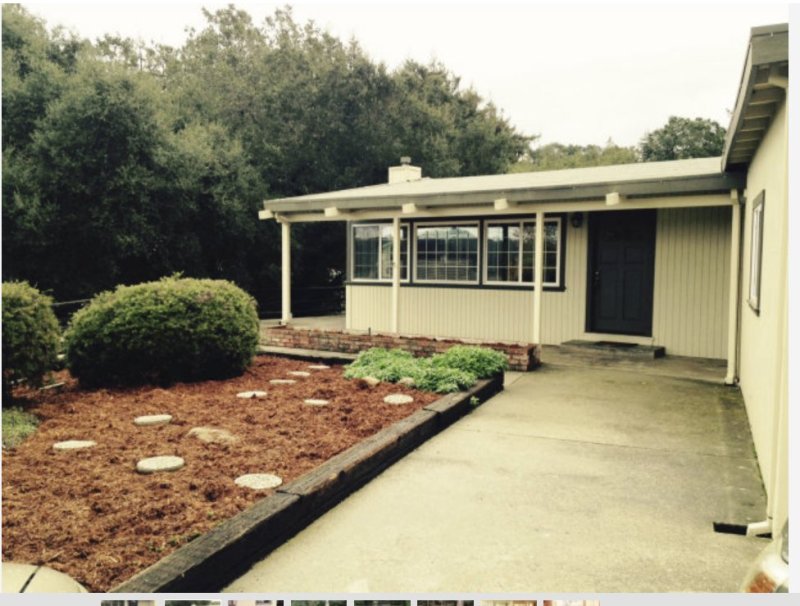 The entry hall. Closet on left. 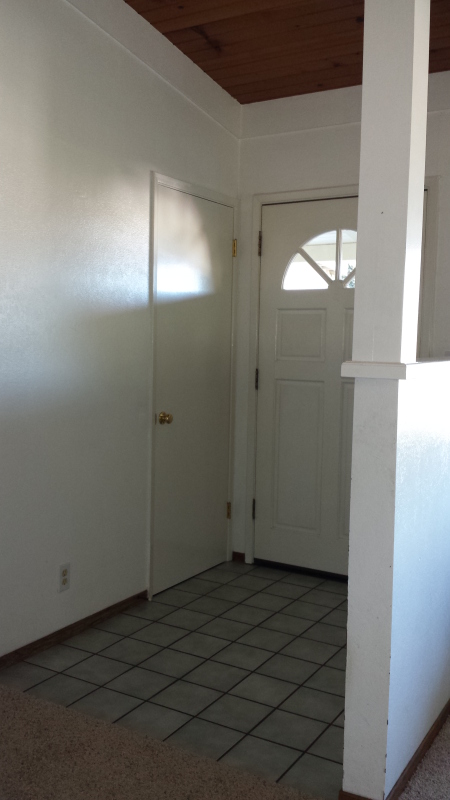 This is what you see as you open the front door. 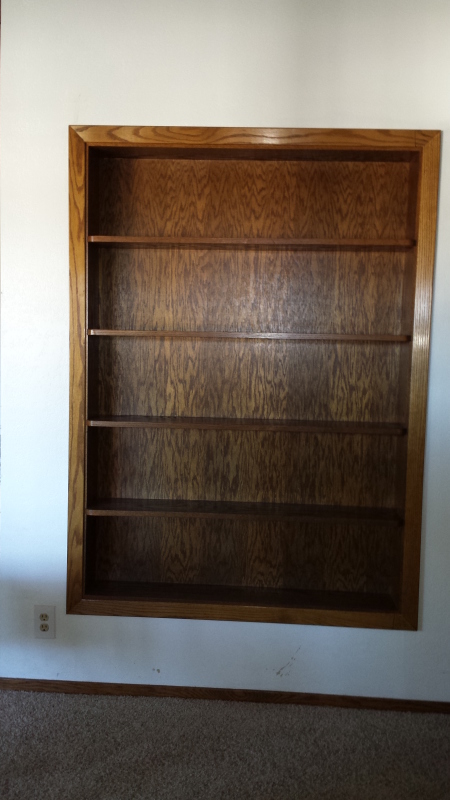 Standing in the entry way. The windows are lovely. The fireplace, well, it doesn’t work so we will do a reface and a new gas insert. 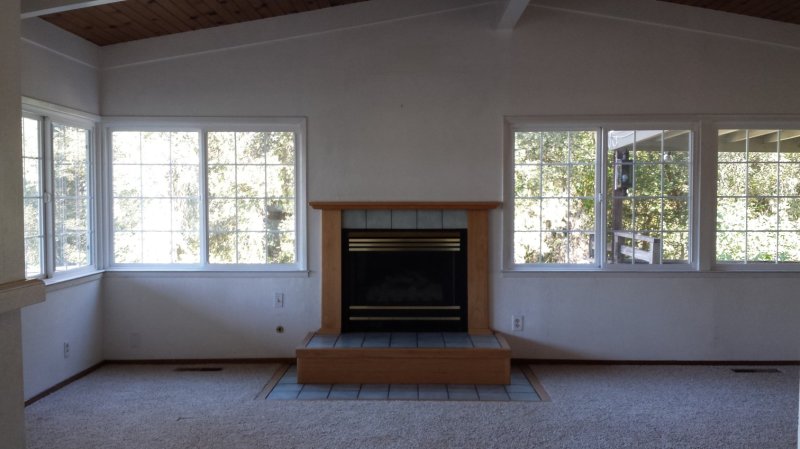 Standing near the fireplace looking toward the kitchen. There’s the small dining area and the small kitchen. Quite a change from the last place. 🙂 To the right of the kitchen peninsula is the entrance to the master bedroom. A funny place for it to be but it was an obvious addition at some time in the past. I do love the ceiling though. 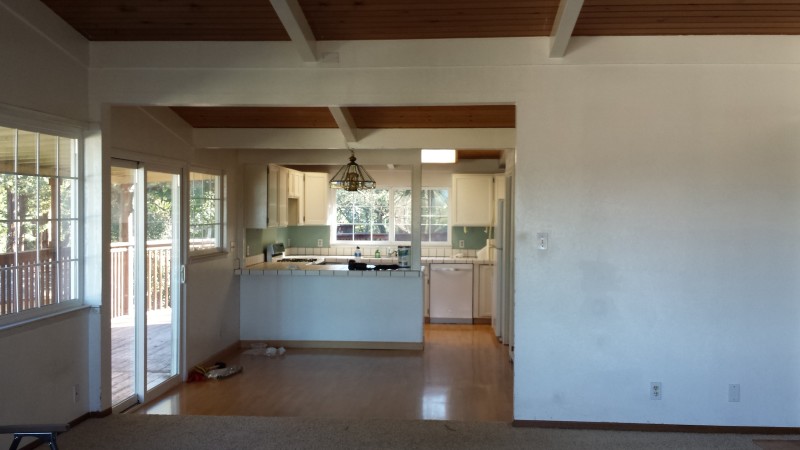 Standing in front of the fireplace this is what you see. Wet bar on right and on the left is where they had their TV. It looks like at one time these were both closets. Hall on the right leads to one bathroom and two small bedrooms. 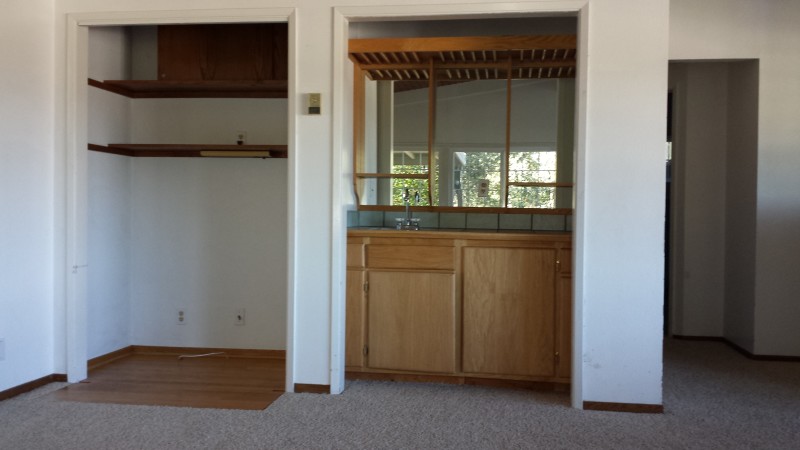 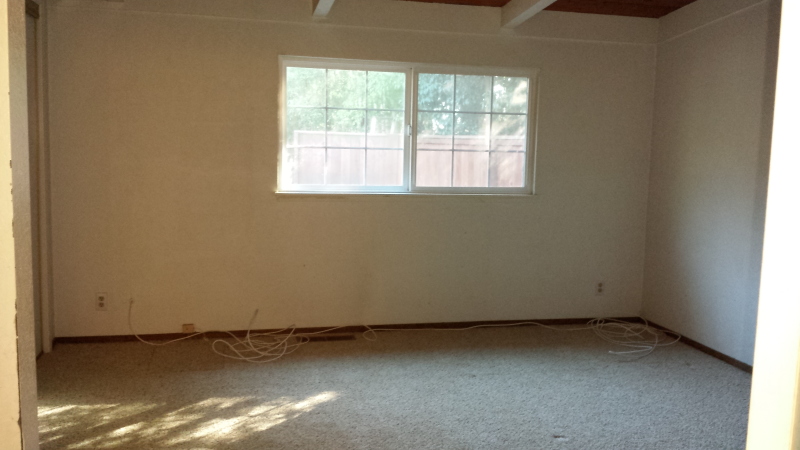 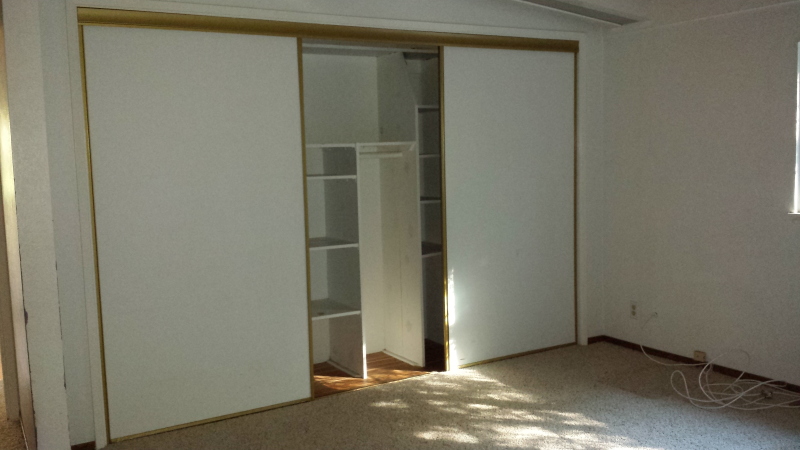 There are two other small bedrooms but they are so small that I can’t really get a picture of them.

Master bath. It looks nicer than it is. Really. Some icky looking stuff on the ceiling and the seals are failing on the shower. 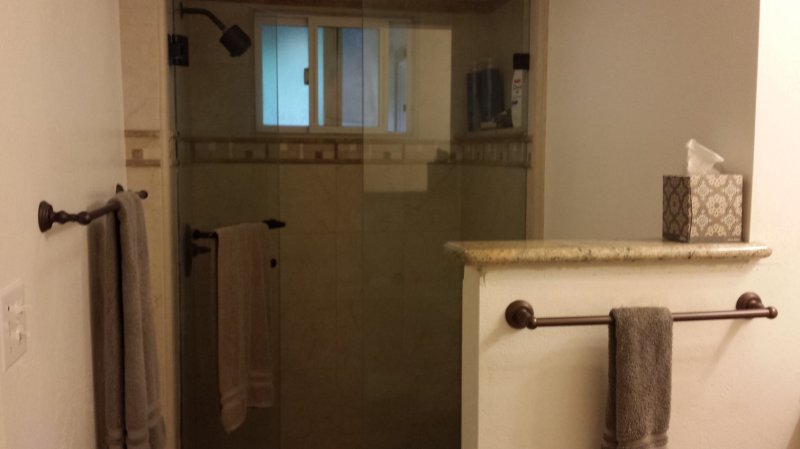 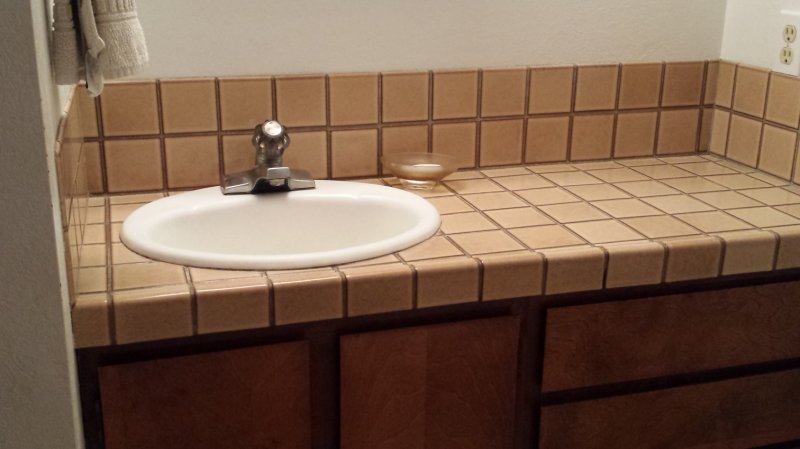 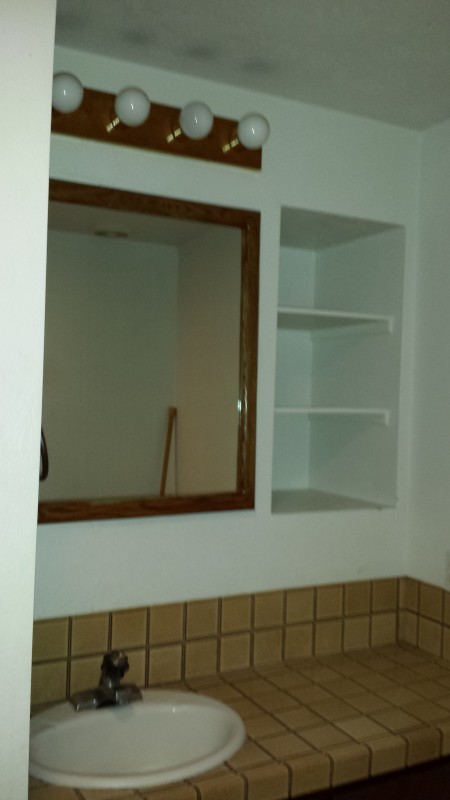 We don’t know where my office or hubby’s office will be. The garage had been converted into a studio unit so we hope to join that living space to the house and out of the hodgepodge of rooms, we will figure out who will work where. There is no secure fencing for Zoey yet so that goes up this week while we work on the design.

It was the property and the location that stole our hearts. And I fall more in love with it each time we are there. To the left in this picture are stairs up to the deck. The oak tree on the far left has a brick patio beneath it. On the far right there is a driveway between the two oak trees. Soon to be a gate. 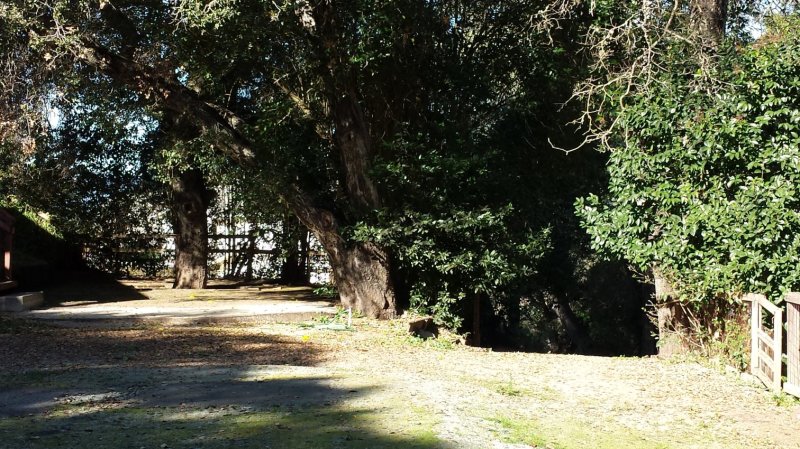 This is standing on the deck looking down. There used to be a batting cage there. Now there is just tons of room for Zoey to run around and down the road, the garden and pond and garden house. The new deer fence going in this week will be 6′ tall. The better to keep Zoey in the yard. 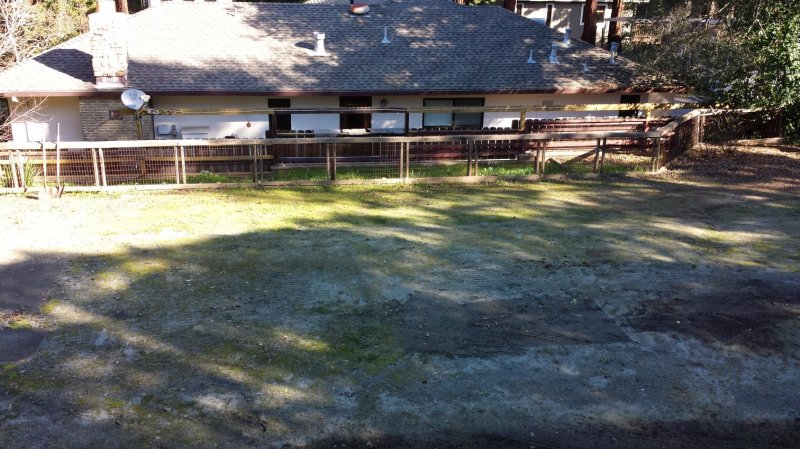 This structure at the back of the property is not safe. Plus it blocks the view of the lovely oak behind it. The structure and the rusted shed are coming out of there this week. 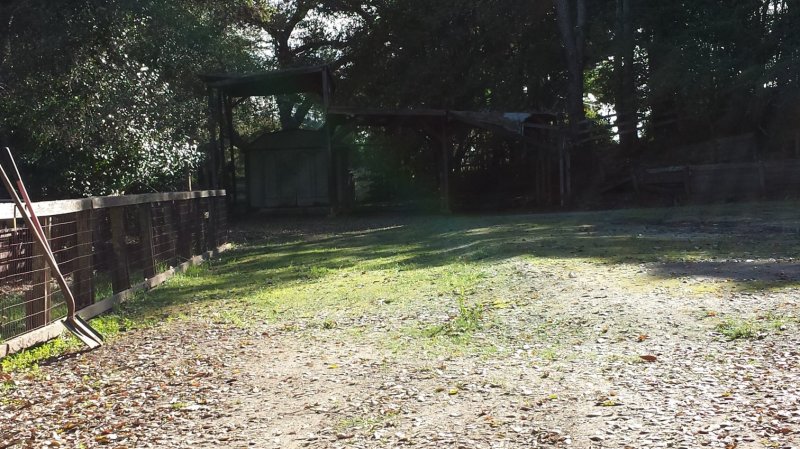 The retaining walls are very tired and will all have to be redone. Eventually. 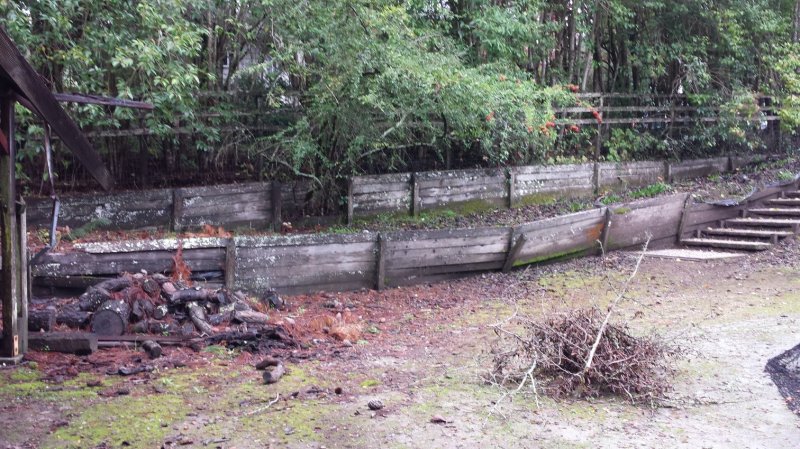 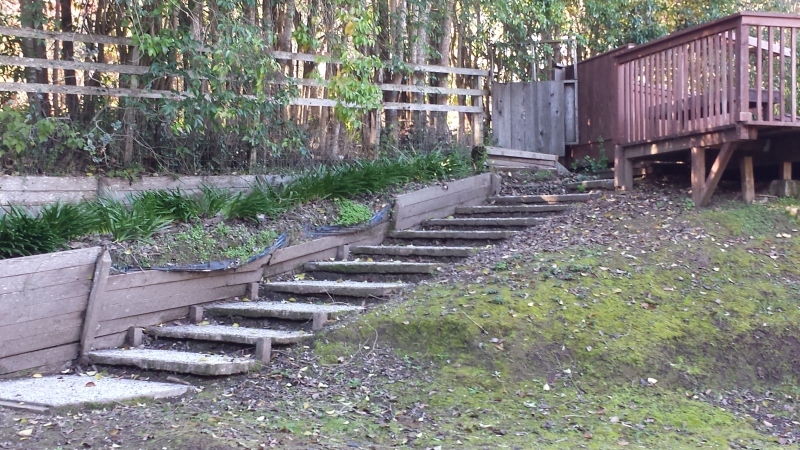 The deck is huge. Much more than we need. Which is fine because it gives us more room to bump out the house and do some great things. The window on the left is the kitchen and on the right is the master bedroom. 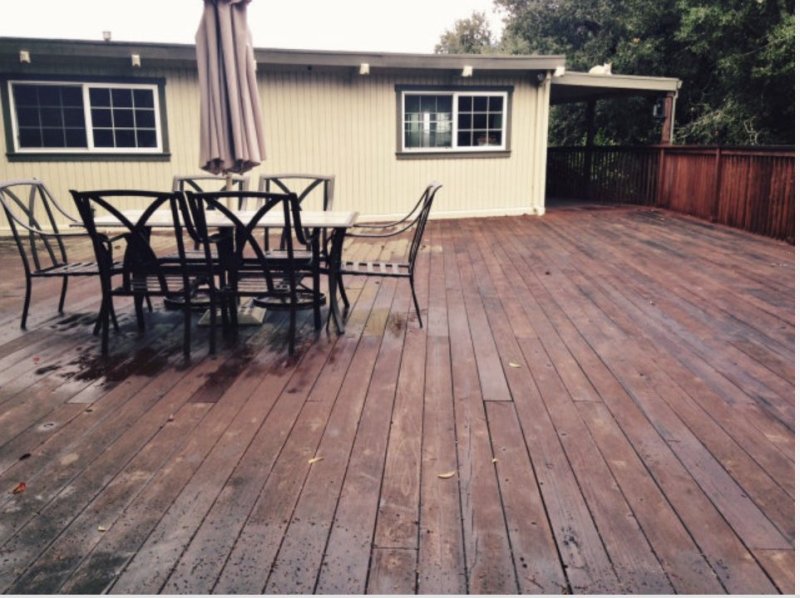 This is the lovely oak tree at the back end of the property. At the moment it is hidden by the death-trap structure. I can’t wait to have a clean view to it. 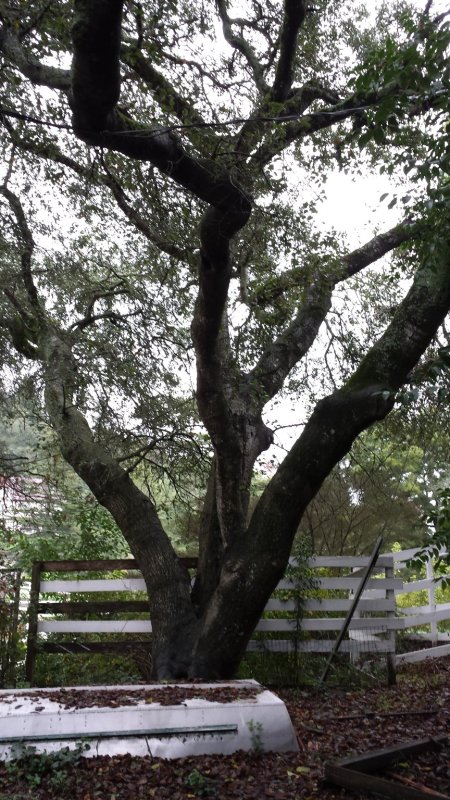 And so, the journey to creating a new home begins.